Information about the most popular of debt solutions

What is an IVA? 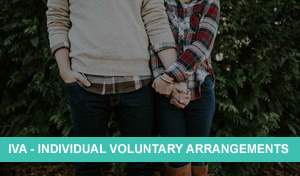 An IVA is an Individual Voluntary Arrangement. It is a formal alternative for people who would like to avoid bankruptcy.

It is used when you are in debt to several creditors and need a plan or arrangement to suitably manage this debt. An IVA will essentially freeze your debts and will allow you to pay them back over time. It will also protect you from your creditors taking action against you. It is a formal repayment proposal that is arranged by a qualified professional called an Insolvency Practitioner. The Insolvency Practitioner will present the proposal to a debtor’s creditors and attempt to gain agreement for it.

How can I apply for an IVA?

You can apply for an IVA if you can afford to pay a suitable contribution towards your debts. The Insolvency Practitioner will work with you to determine what you can afford to pay. The debtor will have to provide information regarding their financial situation. This will include an overview of all debts, assets in their name, income and expenditure and all creditors. You will need to show you have a regular source of income to cover the repayments, which will usually extend over five to six years. The IVA will be based on your circumstances and what you can afford to pay.

What are the costs associated with an IVA?

Although individual circumstances will be different, there are usually two fees associated with an IVA. You will need to pay an initial set up fee with the Insolvency Practitioner. There will then be ongoing fees for the course of the IVA, based on the repayments you make.

Will an IVA be made public? Is there an IVA Register?

All IVA’s are added to the Individual Insolvency Register. Here you will find details about all insolvency cases in England and Wales. This will cover all bankruptcies, Debt Relief Orders and Individual Voluntary Arrangements. You can search the Insolvency Register by individual name or a companies trading name.

Insolvency records are usually removed from the register within three months of the case ending.

Do I qualify for an Individual Voluntary Arrangement?

An Insolvency Practitioner will be able to advise on this. They will use the following criteria to base their decision on whether you’re eligible or not: –

What are the main differences between an IVA and bankruptcy?

Both are a form of insolvency and are legal processes that will sit on your credit file at some point.

Impact on your Credit File

What debts can be paid off with an IVA?

An IVA can be used to pay off some common debts. These include: –

What debts cannot be included in an IVA?

There are several debts you can’t put towards an IVA. These include: –

There are other insolvency options to consider if you feel an Individual Involuntary Arrangement is not right for you.  You may wish to consider Bankruptcyor a Debt Relief Order (DRO).

Interest and charges will be frozen

No more creditor letters or calls chasing the debt

Bailiff and enforcement action can be stopped

Pay back what you can realistically afford

Your proposal has to be accepted by your creditors

Example debts before an IVA

The IVA example is for illustration purposes only. Monthly payments are based on individual circumstances.

When you contact us we will assess your circumstances to establish whether an IVA is the most appropriate solution.

Once you decide an IVA is the best solution your case will be referred to a licensed Insolvency Practitioner. Your case will be prepared and your IVA proposal will be created ready to present to your creditors.

Once approved both you and your creditors will be legally bound by the IVA. As long as you maintain your payments during the IVA (typically five years) all outstanding debt will be written-off and you will be debt free.

Your creditors will vote whether to accept or reject your IVA proposal. 75% of voting creditors (by value of debt) must vote in favor of you proposal for your IVA to be accepted.

To help you understand the options available to you and help you on your road to debt recovery.

We have many years experience helping our customers improve their circumstances and deal with their debts.

This is custom heading element